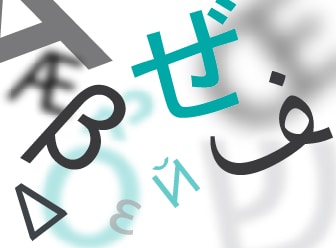 The Littera Graphis Graphics and Web Studio also specialises in multilingual Desktop Publishing (also known as DTP, localisation and processing of images, website layout, text insertion and more), as well as for "rare" languages.
Thanks to its glocalised network, Eurologos Group's copywriters, graphic designers and linguists all work hand in hand. This teamwork allows the Group to provide the best value for money with help from all its worldwide agencies.
That way, when we receive the source files of your documents to be translated, we are able to carry out the translation directly into those files.
So, instead of copy-and-pasting the whole text, the graphic designer just has to simply confirm the page layout with regards to any small changes that may have been made (the length of the text, for example). Also, the translator/reviser can simply carry out the final check of the PDF file and validate the new text's page layout.

Littera Graphis also excels with languages that use alphabets other than the Latin alphabet, to the same linguistic and typographical standard.
Cyrillic, Semitic, Greek and logographic languages involve graphic work that must be adapted to each one. For example, you may know that Arabic and Hebrew are written from right to left, and this requires the layout to be reversed, for page layout as well as for websites (including images). The plug-ins and vectorisations that are specific to these languages are no secret to Eurologos, and haven't been for more than 20 years.